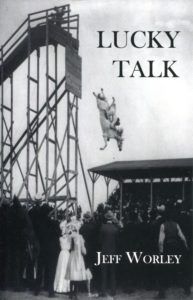 My parents were sitting innocently
in their first living room, listening,
perhaps, to Fibber McGee & Molly, or
the trombone swing of Tommy Dorsey
when I suddenly landed like a sack
of old socks on their shoulders.

Then from the unexpected opening
in the ceiling a gleaming Frigidaire
that would last forever piled on top
of them, a steel-framed ironing board
with its iron whistling down,
a 1946 Ford Sportman with exterior
wood trim and, like a madness
of confetti, unpaid bills fluttered down
and piled up on the frayed carpet.

My parents squirmed and squared
their shoulders. They stood and held
hands. And tried their first steps
through all of it, not knowing which way
to go, no map to guide them.

“I think poems are pieces of talk, savored and sustained.
I would call them ‘lucky talk.’”
–William Stafford, “A Witness for Poetry”

Yesterday at Kroger’s, I heard a boy, maybe 6,
say to his father, We have two eyes and two arms
and two legs. Why don’t we have two penises?
I love language most when it slips
up behind me like this.

Which is why, of course, poets sneak up their ears
in cafes and bars. I’ve never done that with anybody,
and I’m certainly not going to do it with you,
I heard, unmoored from its context
as I pretended to study the Pazzo’s menu.

My wife, always the dutiful daughter, brought
her mother a bright Sunday bouquet.
These flowers are so beautiful, she said,
they look artificial. And my favorite,

from Luis Polonia on ESPN after being traded
by New York: The Yankees are interested
in only one thing—and I don’t know what that is.

It’s the beauty of gravity, the solid
pleasure of falling she’s
feeling above the packed
grandstands, halfway to earth from
the rickety scaffolding
one hundred fifty feet
in the air, riding the broad bare
back of this incredulous
stallion who tucks his forelegs
into his chest, having no choice
but to trust the stupid
ex-rodeo grifter clutching
the black shock of mane
as if determined to take
the whole whooping crowd with
her, make them never forget
that she was here, aiming
the horse toward the small
still target, Eunice’s
legs rising
from the horse’s ribs
as it picks up speed, Eunice
believing—again believing—
bones are lighter
than air, water will open
its arms, take her in,
push her out and up to the cheering world.