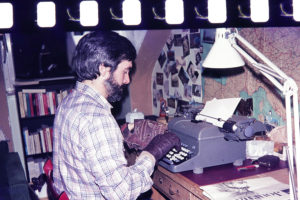 There were numerous typos in Jeff’s early poems.

Worley was born and raised in Wichita, Kansas, and was the second graduate, in 1975, of the Wichita State University MFA creative writing program. He has worked as an offset pressman, cab driver, folk singer, university professor, and research magazine editor. His first teaching position after grad school was with the University of Maryland’s European Division. He worked for University of Maryland until 1983, teaching writing courses and American lit, primarily in Heidelberg and Nuremberg. During his eight years with the European Division, he traveled extensively— in Germany, France, England, Spain, Italy, Austria, the Netherlands, Greece and Yugoslavia.

Worley returned to the United States in 1983 with his wife, Linda, whom he had met in Nuremberg (she also taught with U of M) in 1977. In 1984 Jeff became an assistant professor of English at the Penn State Altoona campus.  In 1986 Linda took an assistant professorship in German at the University of Kentucky. Wanting to try his hand at something new, Jeff joined the staff of Odyssey, UK’s research magazine, where he wrote feature articles, primarily on hard science and medical research. He became editor of the magazine in 1997. Jeff retired from the University of Kentucky in 2010.  He and his wife divide their time between their home in Lexington and their Cave Run Lake cabin.